What is The Rakefish Project? 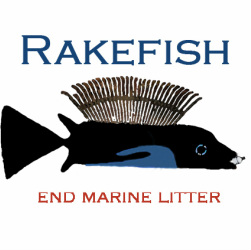 The Rakefish Project is one of many art projects headed by a non-profit organization called Sea of No Plastic. The Rakefish was the very first endeavor of this organization, and after its debut, it continues to have an incredible impact on the world and its constituents.

The focal point of this collaborative project involves a large, 4-foot long sculpture of a fish made by art students at A.W. Cox Elementary School, in Guilford, Connecticut, and elaborated upon by students all over the world. The goal of this project is to bring awareness of the problem of ocean pollution, especially that caused by use of single-use plastics, which constitute much of the "Marine Litter" found in our oceans. The fish is made out of "throw-away" materials such as a broken plastic rake, plastic water bottles, cardboard boxes, an oatmeal container, and plaster.

The mission of The Rakefish Project is to end the global problem of marine litter.  This is accomplished by (first) making everyone aware of the problem and its causes.  If people can change their behaviors and habits that add to the problem, then there is hope that we can turn this environmental disaster around.  What can we do to help solve the problem?

The Rakefish made many friends on  the 2011-2012 U.S. Tour.  Begining in October, 2011, the sculpture traveled to several different states, visiting for about one month at each stop.  Each host school on the tour addressed their assigned research task on the topic of the Great Pacific Garbage Patch, marine litter, and their local watershed. The results from each school were added to the culminating PowerPoint presentation to demonstrate what students have learned, and to help inform others in future displays of the project. Following its initial tour of the US, it continued on its way to California, from where it made its way to Australia. After Australia, the Rakefish now finds itself in Japan, having had touched the lives of people on all sides of the globe.

Link: View the presentations from each host school here.

This project aligns with international efforts to create education initiatives and general awareness on the subject of plastic debris in the world's oceans. We believe, due to the ongoing, collaborative, and highly engaging nature of the project and those involved, that this has the potential to succeed in such a campaign like no other efforts have before.
HOW IT WORKS
Copyright © Sea of No Plastic 2012-2014  All Rights Reserved
Powered by