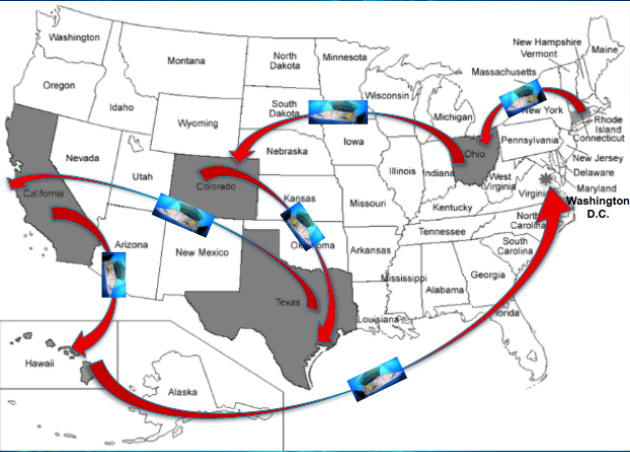 After the send-off ceremony, the crate containing the Rakefish sculpture was shipped to McComb Elementary, McComb, Ohio.

From Ohio, the Rakefish visited two schools in Colorado. The first was Glenwood Springs Elementary. The second school was Aspen Elementary.

From Colorado, the Rakefish was hosted by Serene Hills Elementary, near Austin, Texas.

From California, the Rakefish swam all the way out to Hawaii.  There, the students of Kaunakakai Elementary hosted the Rakefish on the island of Molokai.

The Rakefish then made it all the way to Washington, D.C., hosted by the students of Piney Branch Elementary, in Takoma Park, Maryland.

The Rakefish returned home to Guilford, Connecticut on June 13th, 2012.  The Rakefish then served as the main theme of the Guilford Free Library's Summer Reading Program, Summer, 2012.

From California to Australia! From 2013-14, The Rakefish visited California so it could be prepped for its journey to Australia. Katie Allen and Anushka Bhaskar of the Algalita Marine Research Foundation oversaw its California escapade, raising funds for the Rakefish's Australian vacation. In the meanwhile, it visited with Surfrider Huntington Beach/Seal Beach and The Pegasus School in Orange County. With the combined powers of fundraising and our coalition with Marine Money, the Rakefish made its way to Australia in care of the Take 3 Foundation.

From 2015-16, the Rakefish has been working in Australia, and now has been moved to Japan, where resident artist is working to remodel some broken parts. It is touring the country and awakening Japanese students who traditionally depend on the ocean for much of their lifestyle (being an island nation). We can't wait to see what's next.
Copyright © Sea of No Plastic 2012-2016. All Rights Reserved.
Powered by